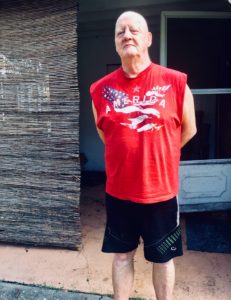 Sitting down with Rickey, it quickly becomes apparent that the two topics that create a sense of passion in him are sports and family. Two things that have helped ease his mind and motivate him during his fight with cancer. After a lingering bout with pneumonia, it was discovered that he had cancer in his lungs that was spreading to his liver. Through the combined efforts and care coordination of dedicated individuals, Rickey was able to receive the treatment he needed in order to now be on the tail-end of his cancer fight.

Before his cancer diagnosis, Rickey was introduced to WeCareJax after being hospitalized for various heart issues. Soon thereafter, Rickey began to go to one of WeCareJax’s partner clinics for help with managing his diabetes and high blood pressure.  At this clinic, he received six months of hands-on nutrition counseling, access to a community food pantry, medications, and the necessary tools for monitoring his blood pressure and glucose levels at home.

Once his cancer was discovered, WeCareJax was there to coordinate his cancer treatment through our network of volunteer physicians and local hospitals.  “WeCare helped me get started with the stuff for my cancer. They got me hooked up at the hospital, helped me with my disability and emergency Medicaid. And they still check in on me.”

Flash forward several months later to a man donning a red muscle tee that has finished six rounds of chemotherapy. When asked what would happen if his cancer comes back, he states the following with a stern look on his face, “It’s just gonna be another fight.”

Copyright ©2020 all rights reserved
Designed by Out of Dust Marketing